Approximately 80 000 Year 12 graduates will attend schoolies celebrations in 2019 around Australia. In a 2018 study where 49 students were interviewed, only 5 of them stated they were not on some kind of drug. 23 admitted to taking MDMA. In 2019, tragically another death of an 18 year old boy was reported to have fallen from a balcony in the celebration of education completion. This is the third balcony death since 2010, at schoolies, that we know of.

These statistics are only a few that do not mention the arrests, violence and alcohol related instances that will occur during this experience and are ignored by most. However, this so called ‘rite of passage’ remains as popular as ever, and for many will be the chosen option to celebrate all that they have learnt over 13 years in the education system – one big party all about the indulgences of the self. At our College we decided to offer a choice, service or schoolies?

Nine students from Marian Catholic College, Griffith in 2019, chose an alternative from the 80 000. They chose to be a part of something that was about others and not themselves. An experience that would take all that they have learnt and showcase that in an act of compassion and care. Nine students of different faiths and friendship groups. Graduates whose first adventure changed the world, if only in a small way, for the better.

“The trip gave us the opportunity to experience a culture beyond our own, to learn the value and importance of life and just how lucky we are here in Australia. It was so special to be able to experience this while giving back to those who need it and are truly grateful for it.” – Teneeka Andreazza

Teneeka Andreazza was one of three of the College Captains that attended the immersion program. Julian Davidge and Joshua Golden also were a part of the trip accompanied by Tarnpreet Kaur, Manvir Singh, Lauren Bertolin, Isabelle Eldridge and Shanuille Parsa. These were the nine successful applicants assisted by Mrs Sanita Lole and myself who travelled overseas to Samoa on the 19th of November. This was the fourth trip for MCC visiting St Paul VI College, Leulomoenga and St Peter’s Primary Falefa. With only days before we were scheduled to arrive, the Samoan government alongside their health services, declared a national emergency in the form of a measles epidemic. Whilst writing this article, 44 deaths have been recorded with 40 of those under the age of 4. 3357 cases have been recorded since October and rising. Samoa is a country in crisis and once again the team was faced with a choice, service or self? With medical advice we all decided to continue knowing that all schools had been shut down (mid HSC), kids were banned from public gatherings and were given a curfew across the island. It was a tense situation to be in and the normal friendly and welcoming culture, understandably, had changed whilst we were there. The challenge was greater and so was the need for friendly faces, compassion and care. The students were choosing service over self and what they achieved was purely amazing.

In a quiet conversation with Julian Davidge whilst sitting in the tropical heat reflecting upon our trip. Julian declared a very insightful observation along the lines of: we have come to Samoa not to be tourists and be served by others but to live with the community and improve it in any way we could by simply being us. An experience he was finding far more rewarding. I could only agree in admiration whole heartedly.

That was what this trip ended up being all about, a group of young adults simply being present in a community in order to assist and aid. Not to take or self reward. To be with our brothers and sisters from across the sea and acknowledge they were going through some tough times.

When we visited the first school with only the teachers present, I felt they were shocked that we still made the effort to come. We asked how we could help and they suggested that their library was in need of repair as it was no longer functional in its state. A room of books had been abandoned in piles as their librarian had left the school in the lurch.

The team, which now included the Aventi family, who had joined us at the school, commenced organising and cleaning what was supposed to be a library. After two days it was sorted into categories with shelving and learning spaces established. St Paul’s had their library back! We also wanted the room to invite the students to learn and enthuse the teachers to use the new resources. We used our creative ability to create murals and cover the walls and doors with inspiring imagery and words. After many hours we had added a piece of fresh appeal to the school and a welcoming sight for returning students. We had also left the school with gifts that we brought with us from Australia. This included pens donated by Griffith Real Estate, music equipment and merchandise from MCC, music accessories from Allison Music Wagga and an array of sporting goods, stationary and Australian paraphernalia. The teachers were blown away and our students learnt the power of giving. How so little can mean so much to those who need it.

It was then on to St Peter’s, we had more gifts to bring them and we were keen to see what we could add to this school in order to bring some much needed cheer. Soon after arriving to a very excited reception of teachers we knew what we needed to do. We wanted to make the warmth of the staff be reflected in their run down classrooms so we got straight to work. In the end we had created artistic learning walls regarding time, science and inspiration to graduate. We had also repaired laptops the school had sent over in previous visits. We once again left them with gifts from home and they offered us thanks and prayers in return. This was a rewarding trade as their words were heartwarming and authentic. Sister Vita (Principal) asked that God bless us all with a long life, because the world needs people like us in it and also, that we could continue to help the children of their school for many years to come. It was a beautiful moment.

The trip involved many moments like this and we pledged to continue to help and assist as much as we possibly could in order to continue to improve the opportunities for children in Samoa. Writing this article was another step towards awareness and opportunity for others to be involved. It is rewarding, it is necessary and it is a part of who we are as human beings to help and assist our fellow man. The world is in need of more people that choose service over self and I was proud to lead a team that made this choice and made a difference in doing so.

Marian is extremely proud of the Project Samoa team of 2019. It was not about the paint on the walls but simply their presence. We wish them every success that is deservingly coming their way in the future. They have demonstrated the values of their 13 years of education and their statistics will not be ignored but are something to be admired by all. 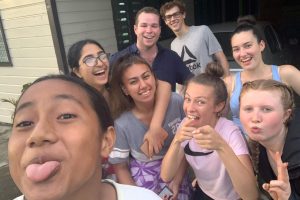 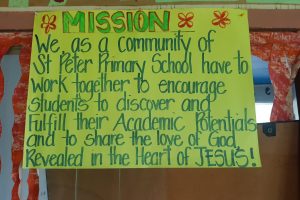